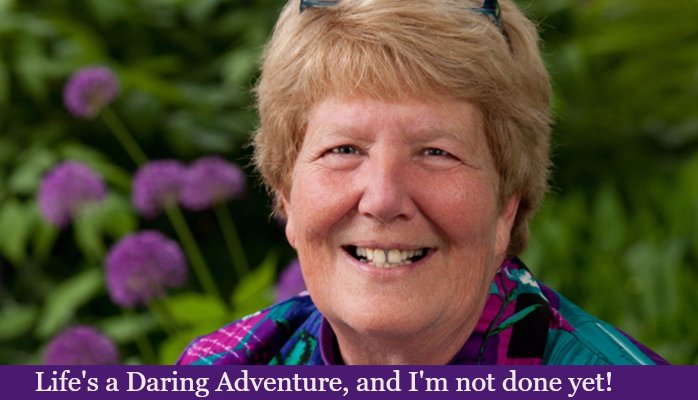 Imagine that your job of almost twenty years comes to an abrupt end. A job that at 61 you still enjoyed and continued to be very good at. Imagine further that your finances are such that retirement is an option. This is the situation that Mary Helen Conroy found herself in less than three years ago.

The course of action she landed on showed a remarkable amount of foresight and led to a pretty amazing journey that continues to unfold.

So after recently joining the ranks of the unemployed Mary Helen launched not one but two start-ups in January of 2014. Life’s A Daring Adventure: Personal Life Coach for Midlife and Retirement and Virtual Retirement Parties: A retirement party where the world can come…without the mess. If that wasn’t enough in October 2015 she co-founded Retiree Rebels, an audio blog/podcasting company that inspires the the nearly and newly retired to live the bonus years as the best years.

Life is either a daring adventure or nothing at all. – Helen Keller

I asked Mary Helen how, with no previous entrepreneurial experience, did she have the courage to launch three start-ups at 60+. She said that throughout her career she had always been an administrator so she had always run what she had done. So she didn’t view going the start-up route as such a large leap. Just as importantly she believed that she had a message that the world needed to hear.

Business owner, public speaker, blogger, podcaster, soon to be published author, excuse-buster extraordinaire, all accomplished in her seventh decade. Mary Helen Conroy is fast becoming a role model to those of us who still believe that our best years are ahead of us.

© 2020 Your Future Reimagined. All Rights Reserved. Content may not be copied or reproduced in any form without express written permission by YFR Inc. Site by ChangeImpetus.com