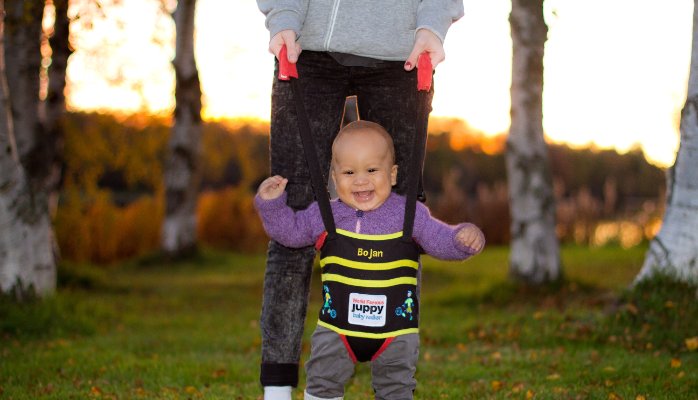 Jeffrey Nash is very good at retail sales. In fact he was often the top salesperson at the national retail clothing chain where he worked in Las Vegas. He was making a very comfortable living until the 2008 financial crisis. As the recession deepened, between decreasing store traffic and referring customers to struggling co-workers, his income took a significant hit. At 56, Jeffrey knew that things were bad and would continue to get worse. He didn’t have the answer, but knew he needed to find an alternate source of income.

In August of that year while watching his granddaughter’s soccer game he spotted a mom helping her baby learn to walk. Nash a father of three and grandfather of five had seen and done this many times himself, but never noted how awkward it was: the mom bending over and the child stumbling along. Perhaps he was particularly receptive due to his need for another income source because at that moment he started to get the idea for a harness that would help babies walk while sparing their parents backs. This was the inspiration for the Juppy Baby Walker.

That day he started sketching a design and asked a tailor at the clothing store where he worked to make a prototype. Using customer’s kids to test it, he perfected the design.

The critical ingredient is getting off your butt and doing something. It’s as simple as that. A lot of people have ideas, but there are few who decide to do something about them now. Not tomorrow. Not next week. But today. The true entrepreneur is a doer, not a dreamer.”  – Nolan Bushnell

He touched base with a patent attorney and  took three weeks of vacation to see if he could make a go of his invention, telling only a few people about his plans. Their opinions were “really negative,” he recalls.

Undaunted, he had a few hundred made up and drove to Los Angeles and San Diego, selling the Juppy from his trunk and on a televised sales show, and earning $12,000 in three weeks.

Upon his return Jeffrey quit his job, cashed in his 401(k), sold his house and car and borrowed money from family and friends. Next up he secured his patent, created a website and ordered 1.000 Juppys.  He has never looked back.

At 62, Jeffrey’s business is still in growth mode and he continues to absolutely love what he is doing. He will be the first to admit dealing with accounts such as Amazon.ca can create some stressful moments, but he has no regrets.

So what are Jeffrey’s lessons learned that apply to any 50+ potential entrepreneur?

Not everyone has Jeffrey’s tolerance for risk, but he would tell you that compared to the potential cost of doing nothing the money he risked made perfect sense. The Juppy Baby Walker is a terrific product and definitely well worth any new parent taking the time to check out.

My next post, blog #3 of the series, will be the story and lessons learned of Alfred Wilson, Owner, Rowdock LLC